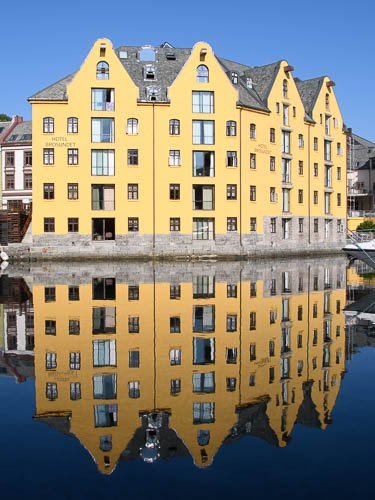 Thursday July 25, 2019: Amsterdam – Ålesund. After check-in in the hotel: a city walk, and evening hike to viewpoint Fjellstua Aksla. The evening is not the best time of day to visit Aksla.Friday July 26, 2019: Morning visit to viewpoint Fjellstua Aksla. Rest of the day: Atlantic road or Atlanterhavsveien. A spectacular road along the coast.Saturday July 27, 2019: Geiranger, Dalsnibba viewpoint, Trollstigen viewpoint. Sunday July 28, 2019: Transfer Ålesund – Runde Island, check-in in Runde Miljøsenter. Afternoon hike to Lundera (no puffins), Gannet rock (lots of gannets), not many other birds. It was extremely warm. Back via a cross country short cut, which seemed to be a well travelled path, but ended up between sheep and in a watery and muddy area.Monday July 29, 2019: small tour via Remøya, to Nerlandsøya. Short walk to Golleneset fyr, a small lighthouse. Evening bird watching boat tour around the island. At night sundowner to Lundera, again no puffins., we left at 22:30h.Thursday July 30, 2019: Drive back to Alesund, short visit to Alnes lighthouse on Godøya Island. Return trip Ålesund – Amsterdam

It was a quite some time ago that we had made a trip to the Northern Lights. So were really due for a return visit. We were only briefly in the far north this time. We visited Tromsø for 1 weekend, leaving on Thursday 11 February and returning on Monday 15 February.

Friday, March 8, 2013: Arrival at Malangen.
What a coincidence, we have house #33 again, exactly the same house as last year. After dinner we drove around the Malangen Peninsula hoping to see some northern lights. Unfortunately, there was no activity. We went back around midnight.

Saturday, March 9, 2013: We went for a walk to Camp Nikka, which is 1.6 km from the resort. The camp consists of a few wooden houses and a half open wooden lavvo.
After our dinner we saw the familiar green lines appear from the window. At Camp Nikka a lovely fire had been lit, so we were sheltered from the wind in the lavvo with a little warmth from the fire. There was a whole group of Japanese people who were building a party. It was a happy mess!!! There were also a number of English and Dutch people.
After a about an hour we spotted the first weak northern lights. Unfortunately, the weather deteriorated quickly, so we started the return trip to the resort, in the dark, snowy forest! We arrived back in the cabin at midnight.

Sunday, March 10, 2013: Visit Ishavs Cathedral in Tromsø, also known as the “Arctic Cathedral”. The Church is open from 2 to 6. You can only pay in cash (40 NOK per person). The church built in the shape of a triangle. The concrete of the walls are made to look like ice. Light enters from different sides. It is a special building to view. After our visit to the church we drove back to Tromsø. In the evening it was cloudy, so useless to to.

Monday, March 11, 2013: Again a the walk to Camp Nikka. It was lovely to walk in the sun, and then sit in the lavvo for a while. In the evening the weather conditions remained great, and at 9 we left for the camp. We had no idea if there was activity, because the Internet was not available. We sat in the lavvo by the campfire until well over midnight, but nothing happened.

Tuesday, March 12, 2013: Again the start of a sunny day! But that wouldn’t last long. Today the destination was Kilpisjärvi (Finland). That is a long drive from Malangen, an hour or two, but it is a beautiful journey through forests, mountains and eventually a white plateau. That evening by 9 o’clock the skies cleared and we saw the best northern lights show of this trip. We stayed outside until 2 am the next morning. First at Camp Nikka, and later for our own cabin at the resort.

Wednesday, March 13, 2013: Time to return home. After two flights we returned to Schiphol early in the evening.